Rashid Nugmanov reveals the story of...

The well-known film director of the "Needle" movie with Victor Tsoi told the Club members and invited guests about his new project — the historical detective series "BATU".

Action of the series will take place on territories of Kazakhstan, Russia, Mongolia, China and Rome. A large study of the author of the idea, which preceded the development of the storyline, the characters of the film, historical characters, speaks about the laborious and painstaking work of Rashid Nugmanov. And about the passion and the unprecedented inspiration that was felt in all his words.

Batu was Genghis Khan's favorite grandson. In the movie, he will investigate the mystery of the death of his father, the eldest son of Genghis Khan. Revealing a global conspiracy, he creates an Empire in Alliance with Alexander Nevsky and administers justice to criminals.

According to Rashid Nugmanov  the viewers will see ths historical thriller in 2021. And next year, a documentary will be released, which will be a kind of" introduction " to the topic of the whole story.

We wish the master of cinematography to achieve everything he has in mind. To find professional partners and actors, to create unusual costumes in order for the historical thriller series to turn out the way the author imagines it.

And then the world will learn more about the "white spots" of the history of the 13th century, which voluntarily or unwittingly continue to influence our times.

We thank Mr. Nugmanov for an extremely interesting presentation. 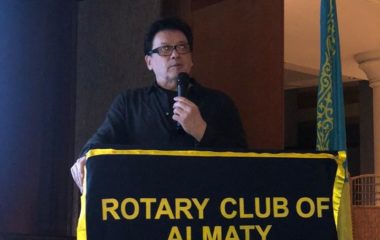