The aim of the project was to increase the safety of school children crossing the roads in front of 3 Almaty schools.

There are lots of schools located too close to the roads and the number of accidents happening to the children is very high. There are no special info boards, signs and/or pedestrian roads in front of majority school, but a lot of boys and girls visit the school without adults.

The statistics of road incidents among schoolchildren is discouraging. According to Traffic Police Committee of the Ministry of Internal Affairs of the Republic of Kazakhstan 199 children were killed and 1,490 were injured in road accidents in 2008 only. One of the most widespread reasons of tragedies is a vehicle run over when a kid is crossing the street. Territories of schools are located, as a rule, on the crossing of streets and not all crossroads near the schools that time were equipped according to traffic rules - there were no traffic lights for pedestrians, there were an insufficient number of zebra crossings, fences separating vehicle way from sidewalks.

Color coating and anti-skidding coating use in the UK at the end of 1970th decreased the number of traffic accidents with children for more than 60% during the first year of use. Today this measure is used in lots of European and Asian countries.

The effect is achieved due to cars’ braking path on such coatings is three times less than on the asphalt, and the color allows to highlight safety zones on roads, attracting road users’ attention and serving a purpose of regulation of their movement on the road.

The project was implemented by the efforts and funds of the Rotary Club of Almaty, several partner Rotary Clubs from Hong-Kong and the Rotary Foundation.

Young partners from Rotaract Club of Almaty were also involved in the educational part of the project, explaining the children and their parents the basic rules of behaving themselves on the roads. They have also developed a schedule of watches and worked as volunteers  helping children to crossing the roads at a heavy-traffic time in the morning and in the noon. 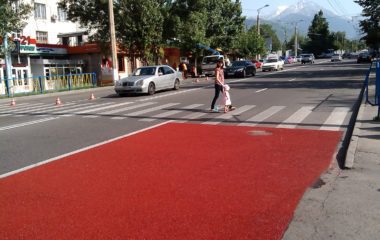