In autumn of 2017 Rotary Club of Almaty made a decision to support a social project of a partnering organization - Rotaract Club of Almaty. During 2 months (October-November) there was a social media campaign calling almatynians to donate their blood. Drop by Drop project has reminded us that we could all help neighbor (even unknown neighbor). Every day and night there are doctors fighting for someone's life at city hospitals. And all of them need the donors' blood.

Almost all Rotarians who could donate blood by medical condition took participation in Drop by Drop project.

There were also some companies participating in the project with their employees. Among the most active were staff members of Almatytelecom and JSC Bachus.

At the end of the project Rotaract has run a special party for donors-participants in one of the night clubs of Almaty. 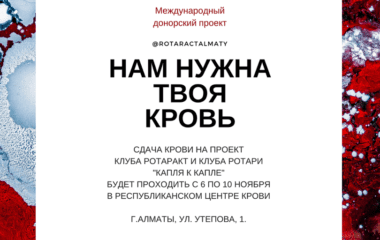