Charitable Rotary Vienna Balls have become a wonderful tradition of Almaty within almost 15 years, which our Club has been running with a support of numerous friends, partners and sponsor companies.

The Rotary Vienna Ball 2014 was the final event of this glorious series, when all proceeds were transferred within a frame of Fresh Air ALmaty project for a special air-purifying equipment for surgical and intensive care units in the Republican Children clinic "Aksay" located near Almaty.

Based on numerous guests and sponsors opinions this ball was a true celebration of the Austrian culture. We have tried to maximize all details being authentic - starting from a delicious Austrian cuisine cooked by Austrian chef and rarely found that time in Almaty Austrian wines, which were brought specially for this evening, to music and traditional costumes of some participants.

One of the bright features of the Rotary Vienna Ball 2014 was a charity auction supported by two extraordinary sportsmen of the world - ALexander Vinokurov and Novak Jokovich. The Vino's Olympic shirt and Novak's tennis raquet became main auction's lots, which were sold to guests-auction participants.

Recollections of this Grand event could be experienced here below... 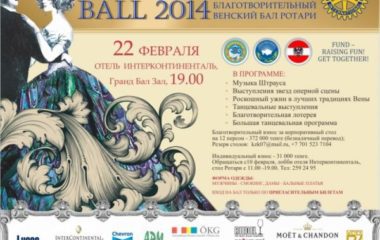